Notice: Our customer care center will be closed on Monday, May 25th, 2020 in observance of Memorial Day.

More Americans are working in the freelance/gig economy these days. There are pluses and minuses, including flexibility and financial insecurity. The latter creates big sales opportunities for insurance agents. 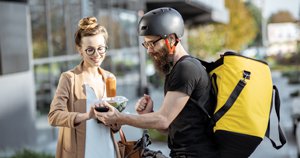 The U.S Gig Economy is expanding thanks to firms such as Uber, Lyft, TaskRabbit, Upwork, and others. That’s because these platforms have become extremely successful at using technology to link gig workers—people who provide skilled or unskilled services or share their personal assets—with consumers in search of quick, affordable, and convenient solutions to life’s challenges.

But the Gig Economy is just one part of the surging freelance marketplace. There are also millions of workers who operate as traditional independent contractors, getting projects through their own efforts rather than through an electronic platform.  Between the two freelancer types, the American workplace has become more flexible and responsive to employee and employer needs, but often less financially secure for workers.

According to “Freelancing in America: 2019,” an assessment of America’s independent workforce, found that 57 million Americans have freelanced this year, accounting for 35 percent of the U.S. workforce and 5 percent of gross domestic product (GDP). This is an increase of four million independent workers since 2014.  What’s more, the share of full-time freelancers grew 11 percentage points since 2014, from 17 percent that year to 28 percent in 2019.

What began as a work arrangement born of financial necessity—temporary assignments to keep unemployed workers afloat until they landed new full-time jobs—has became a way of life for millions of largely satisfied workers. According to the sixth annual “Freelancing in America” survey, sponsored by Freelancers Union and Upwork, 60 percent of the 6,000 surveyed workers said they became freelancers by choice. In addition, the percentage of independent workers who view their work style as a long-term career choice now equals the percentage who do it solely to make short-term cash (both at 50 percent). The number of long-term freelancers has grown from 18.5 million to 28.5 million since 2014.

With the growing acceptance of the freelance lifestyle has come an increased awareness of its financial downsides: lower pay, lack of health insurance, no disability coverage, no retirement plans, and no workers’ compensation. This has sparked increased government motivation to do something about freelancer insecurity. The gig platforms have also taken limited steps to provide liability and other forms of insurance to their contractors.

The insurance industry, for its part, has been experimenting with new ways to provide coverage on demand that synchs with gig workers’ flexible work arrangements. Financial advisors and insurance agents, too, have begun to view freelancers as a more attractive market segment, in part because they now represent a greater share of GDP and have so many unmet needs.

How about you? Have you considered targeting freelancers as a niche market? Do you view them as having substantial financial needs you can profitably solve? If so, read on for more insights about the freelance/gig economy and its growing need for insurance solutions.

However, before you pursue them, it’s important to understand your target. This involves becoming familiar with the nature of gig work, the types of freelancers operating today, and the characteristics of those who choose independent work arrangements.

The nature of gig work

According to a McKinsey Global Institute study—“Independent Work: Choice, Necessity, and the Gig Economy”—freelance work has three important features:

These features apply to both freelancers who provide services (software coders, marketing copywriters, graphic designers) and those who sell goods or services. They also apply to those who sell their services through online platforms such as Uber or TaskRabbit and those who share their assets on Airbnb and similar websites. Since workers have diverse backgrounds and preferences, there is no single profile that applies to all freelancers. Instead, McKinsey says independent workers fall into one of four categories, including those...

Another way of viewing gig workers or freelancers is to distinguish those who work full-time at independent projects with those who have a traditional full- or part-time jobs as well as a gig. According to Prudential Financial study, “Gig Workers in America,” gig-only workers have a practical, if not somewhat jaundiced, view of their job situation. Forty-four percent of those surveyed said doing gig work is “nothing more than helping to pay the bills.”

What’s more, about a third of them said they work gigs in order to increase their income due to external circumstances. Interestingly, gig-only workers did not see their situation advancing their long-term aspirations (only 36 percent saw it as an important step). And only 19 percent said it would help them figure out what they wanted to do long term.

Gig-plus workers had a much more idealistic view of their work. Only 29 percent saw it as a financial necessity, while significantly more saw it as an important step toward achieving their long-term aspirations and clarity about their future direction (19 percent and 27 percent, respectively).

Why do people choose an independent or gig working arrangement? Unlike those who work in full-time traditional jobs, who may land there somewhat by chance, freelancers often have strong, highly specific motivations for going or staying independent. In addition to financial objectives, they...

The demographics of gig workers are interesting. The Prudential study paints distinct portraits of gig-only vs. gig-plus workers. Compared to full-time workers, those who focus solely on gig work are more likely to be:

Gig-plus workers, compared to those working full-time, tend to:

In what fields do gig workers ply their trade? According to Prudential, the top four fields for gig-only workers were:

For the gig-plus workers, their top four fields were:

But here’s the financial reality of gig work. According to Prudential, gig-only workers have an average annual income of $36,500 vs. $55,800 and $62,700 for gig-plus and conventional full-time workers, respectively. Related to this income disparity is the tendency for gig workers to be ineligible for employer-sponsored retirement plans. For instance, only 16 percent of gig-only workers have assets in an employer retirement plan, compared with 25 percent of gig-plus workers and 52 percent of conventional employees.

When you consider their access to employer-provided benefits, the picture is equally grim. Only 40 percent of gig-only professionals have health insurance; 25 percent, dental insurance; 20 percent, life insurance; 5 percent, short-term disability insurance; and 7 percent, long-term disability insurance. Although their gig-plus brethren do somewhat better, both types of gig workers are far less likely to have an adequate benefit safety net, leaving them vulnerable to financial risks such as premature family-member deaths, extended periods of disability, or asset-draining illnesses.

The financial safety net holes just mentioned don’t include the risks inherent in their business activities:

According to a study from Cake & Arrow, a customer-experience consulting firm, only about 18 percent of gig workers have insurance to protect them against the risks of conducting their independent, freelance, contract, or platform work (namely, general liability or workers’ compensation insurance).

Although freelance work has much to recommend it, financial insecurity is one of the key downsides of this work style. For example, according to Prudential’s “Gig Workers in America” study, only 50 percent of gig-only workers and 51 percent of gig-plus workers feel financially secure in their lives. This compares with 59 percent for conventional full-time employees.

Yet gig workers strongly value the control they wield over their work life. They welcome the sense of pride and fulfillment they get from using their professional skills. They especially appreciate being able to determine their own work schedules and to manage the types of interactions they have with clients and others on the job.

In fact, they enjoy their independent job status so much they are less likely to want to convert to traditional work than full-time employees are interested in becoming gig workers (19 percent vs. 32 percent).

In conclusion, the U.S. freelance/gig economy is vital, growing, and here to stay. It’s not perfect, but it’s largely meeting the needs of millions of Americans today. Should you become more involved with this target market? Definitely and here’s why:

Gig workers may make less money, but they have gaping holes in their insurance safety nets. Nearly all need more...

Not only that, gig workers don’t understand what types of insurance they need to protect themselves against professional mistakes or job-related illnesses or injuries. And since they are likely working hard in their gigs or even holding down a gig plus a conventional job, they have little time left to educate themselves about insurance products. That’s where you come in.

Not only do gig workers need help with their overall financial planning (budgeting, taxes, etc.), they are in desperate need of strengthening their insurance safety net. Since they have a thinner financial cushion than do traditional employees, the urgency they feel about mitigating their insurance risk exposures is sharp.

At the end of the day, engaging with gig workers will likely not only help them, but also produce a lot of sales for you. Are you ready to take on the challenge of serving America’s hard-working freelancers?

For more information on the insurance marketing opportunities of working with America’s gig workers, watch for Part 2 in this series.